The 1556 Basel UFO case was a mass sighting that may or may not have been celestial phenomena over the skies of Basel, Switzerland.

A broadsheet that dated back to the events of 1566. The text translates as giving the following description of the event:

It happened in 1566 three times, on 27 and 28 of July, and on August 7, against the sunrise and sunset; we saw strange shapes in the sky above Basel.

During the year 1566, on the 27th of July, after the sun had shone warm on the clear, bright skies, and then around 9 pm, it suddenly took a different shape and color. First, the sun lost all its radiance and luster, and it was no bigger than the full moon, and finally it seemed to weep tears of blood and the air behind him went dark. And he was seen by all the people of the city and countryside. In much the same way also the moon, which has already been almost full and has shone through the night, assuming an almost blood-red color in the sky. The next day, Sunday, the sun rose at about six o’clock and slept with the same appearance it had when it was lying before. He lit the houses, streets and around as if everything was blood-red and fiery. At the dawn of August 7, we saw large black spheres coming and going with great speed and precipitation before the sun and chattered as if they led a fight. Many of them were fiery red and, soon crumbled and then extinguished. 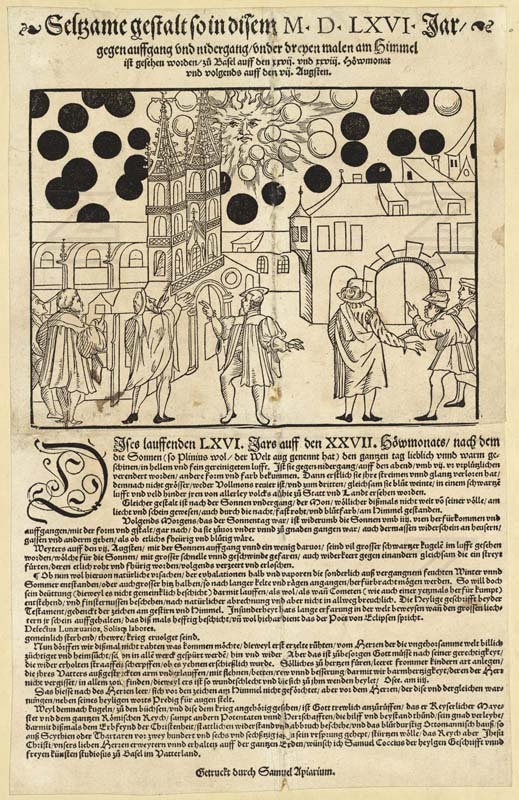 The Basel 1566 pamphlet describes an unusual series of sunrises and sunsets. Celestial phenomena were said to have “fought” together, displaying what looked like a battle of numerous red and black balls in the sky before sunrise.

Ufologist who are just pro-alien without any kind of logical thinking have attributed the event sky war and claim it’s an alien battle between aposing civilizations.

The leaflet written by historian Samuel Coccius reported the Basel 1566 UFO case as a religious event. In the 1600s and 1700s, many leaflets wrote of “miracles” and “sky spectacles”.

According to Coccius, on July 27-28 and August 7, 1566, many local witnesses in Basel reported seeing three separate phenomena they struggled to explain. The first is described as an unusual sunrise, the second as a total eclipse of the moon with a red sun rising, and the third like a cloud of black spheres in front of the sun.

All of these can easily be attributed to astronomical and natural causes and it’s probably safe to assume that aliens were not shooting each other out the sky a few hundred years ago.

Despite this being caused by celestial phenomena, it has still made the UFO files because of it having some kind of mystery around it and for some time it was an unexplained aerial phenomena, but with advances in science, astronomy and our understanding, we would consider the Basel UFO nothing more than natural causes.