On December 29, 1980, less than 48 hours after the incredible Rendlesham Forest UFO incident took place, the Cash Landrum UFO incident occurred across the Atlantic ocean and with many similarities.

Whilst Betty Cash, Vickie Landrum, and Vickie’s 7 year old grandson, Colby Landrum, were driving back to their home in Dayton, Texas after eating out. At approximately 9pm, they turned onto an isolated road in a dense wooded area, similar to that of the Rendlesham Forest.

Whilst Betty was driving Vickie and Colby home, they witnessed a bright light just above the tree line. After a few minutes of driving down the windy forest roads, they witnessed it again, although this time it was much brighter and they could see the object that was admitting the light. They said that the light was coming from a large diamond object that was hovering above the tree line, described as a dull metallic silver, and what looked like flames were coming out the bottom of it.

They also noted that there was serious heat coming from the unidentified flying object Vickie told Betty to stop the car out of fear that getting any closer would cause them to be burned. Betty said she was anxious and considered turning the car around, but the road was too narrow and the wet muddy shoulder could have got the car stuck in an attempt to flee back the way they came.

Betty and Vickie got out the car to investigate, but Colby was scared being left alone, so Vickie returned as Betty stayed outside the car to get a better look. She described it as a large diamond shaped object with the top and bottom cut off, about 40 meters (130 feet) tall. 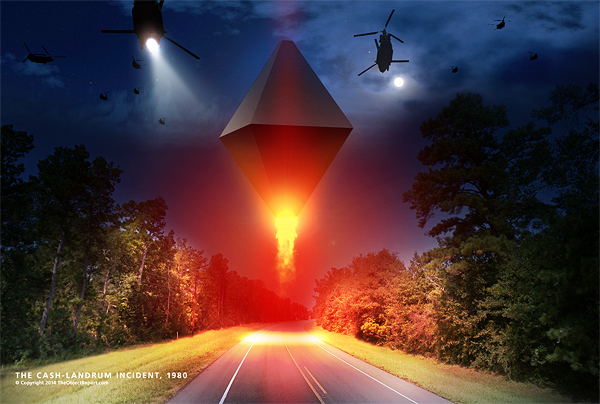 Over the next few minutes, blue lights flickered in the center and flames shot out the bottom in an outwards direction, creating a large cone shape. The heat was said to make the metal of their car painful to the touch, so much so she had to use her coat to open the car door in order to protect her hand.

Another very strange part of the story was the dashboard of the car when Betty got back in. She touched the softened vinyl that left a handprint which was visible weeks afterwards. Unfortunately no picture was ever taken. Or if there was, it never surfaced. The Cash Landrum UFO didn’t seem to interact with them whatsoever, but moment later, the unthinkable happened.

Betty and Vickie thought they had witnessed a UFO that no one would believe, the unidentified object ascended above the tree top just as military helicopters came flooding in, surrounding the UFO in tight formation. Cash and Landrum counted 23 helicopters in total, later identifying some of them as tandem-rotor Boeing CH-47 Chinooks, a craft used by military forces all over the world.

With the object elevated above the trees and the road clear, Betty drove off, claiming to spot the helicopters and the UFO in the distance. The whole ordeal from first sight to the military aircraft arriving lasted about 20 minutes.

After leaving the scene and Betty dropping Vickie and Colby home, all three of them reported having similar symptoms including nausea, diarrhea, and the feeling of sunburned skin, among other things.

The following days saw Betty’s symptoms worsen and on January 3, 1981, she admitted herself to hospital. The report stated she ”could not walk, and had lost large patches of skin and clumps of hair. She was released after 12 days, though her condition was not much better, and she later returned to the hospital for another 15 days.”

After her recovery, she featured on an HBO Documentary in 1984 called ”UFOs: What’s Going On” where she claimed she’d been treated for cancer after exposure to the ”radioactive UFO.”

Vickie and Colby didn’t suffer like Betty, but they did experience skin sores and hair loss. What’s interesting is that these are all typical symptoms of exposure to radiation, something that common in space travel.

A radiologist who examined the witnesses’ medical records for MUFON wrote, “We have strong evidence that these patients have suffered secondary damage to ionizing radiation. It is also possible that there was an infrared component as well.”

Investigators later located a Dayton police officer, Detective Lamar Walker, and his wife who claimed to have seen 12 Chinook-type helicopters near the same area in which the Cash–Landrum event allegedly occurred and at roughly the same time. These other witnesses did not report seeing a large diamond-shaped object.

In April 1981, four months after the Cash Landrum UFO, a CH-47 helicopter flew into Dayton, Texas and Vickie took Colby up towards in while it was sat on the landing pad and after waiting in line, they spoke to the pilot.

The two of them got into the helicopter and sat there with the pilot. Whilst acting like a tour guide to the inside of the helicopter, he shared that he’d been in the area before to check on a UFO that was in trouble near Huffman, but when Vickie Landrum told the pilot who she was and that she was one of the people burned by the UFO, the pilot refused to talk to them any further and made it clear it was time for them to leave the craft.

With many similarities and other elements present, such as radiation, military interception who showed up out of nowhere, suggesting radar picked up the UFO, this many be one of the most crucial cases in UFO history.