This has been known by a few names over the years, including ”Alien Abduction: Did it happen?” and ”Incident in Lake County”, but we will just go with the name we knew it by when we first saw it on television in 1999, The McPherson’s Tape.

We found The McPherson’s Tape whilst flicking through satellite TV late one night. We remember looking in the satellite guide at what was on the channel selected. It was named ”The McPherson’s Tape” and gave a very brief overview of an alien abduction, so of course, we were intrigued.

The recordings from that evening were allegedly found by a Sheriff who went to a farm house to find the entire family gone and just a video camera sitting on the kitchen counter.

The youngest brother in the family, Tommy, aged sixteen at the time, was filming their family’s Thanksgiving get together when the power went out. Tommy followed his two older brothers, Kurt and Brian, to the fusebox outside the house. Upon viewing the box, it looked as if it had been shot with a blaster from Star Wars.

Their attention was quickly drawn to a transformer down the hill that was exploding, suggestively from a lightning strike, but when they got closer to look at it, they noticed something far more intriguing.

Tommy’s camera started to distort, both the visual and audio went blurry and crackly. They were looking at an unidentified craft that was sat beyond the trees at the bottom of the hill. Tommy suggested it was a UFO, obviously referring to extra-terrestrials, and started to get a little anxious, while the other two brothers didn’t seem to be bothered.

As they watched on, they noticed a being inside the craft and another outside that was walking towards the hill they were stationed upon. They used some kind of red laser weapon and shot it towards a dead cow on the ground. As the three brothers watched on, the being noticed them and shone the red laser at them, frying Brian’s hand. As it did, all three of them ran back to the now candlelit house as fast as possible. 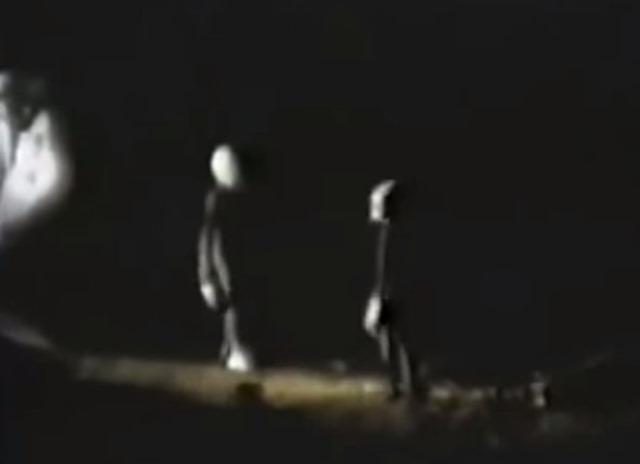 That was just the beginning though. The three brothers were traumatized and tried to convince the other family members of what they’d just seen. They even showed them the footage, but most of them either didn’t believe it or dismissed it as ”probably just some pranksters”.

The three brothers tried to let it go as the mother insisted they sit down and eat Thanksgiving dinner together. As they did, Tommy’s camera started to pixelate and blur again, then he noticed a figure walk past the window behind Kurt, which he caught on camera. Kurt immediately went straight for two shotguns and gave one to Brian.

We won’t explain the entire video because it was about two hours long, but the situation escalated, quickly. The beings that made their way to the house tried to open the doors, they caused the electric to go back on after the fuse box had been completely destroyed, they caused the family to have simultaneous nose bleeds, ringing in their ears and a burning sensation on their shoulders. Brian’s girlfriend was even rendered unconscious by a red laser light that came through a solid wooden door. 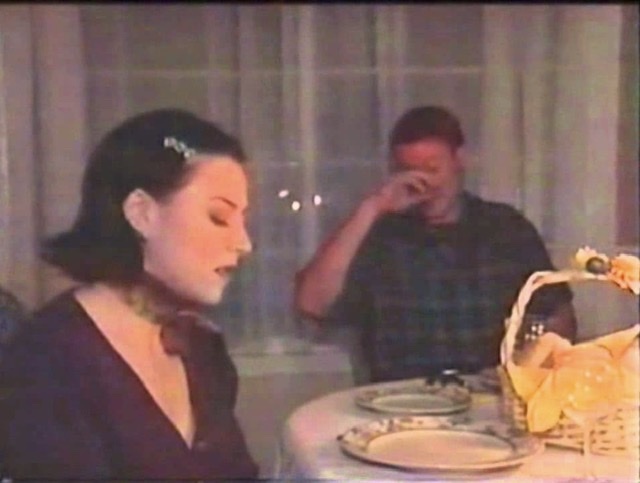 Later, they breached the house and Kurt and Brian locked one of the beings in a bedroom. They secured the door shut, but it pointed its red laser through the bedroom door and Kurt shot the being. Upon checking, it was dead on the floor, but they never found what Brian described as a ”laser sword”.

Matthew, who was Kurt’s sister’s boyfriend, went to get his truck and never came back. Then Kurt and Brian went to try and get a vehicle, but suffered the same mysterious fate and never returned. At the end of the ordeal, Tommy placed the video camera on the kitchen counter and the remaining family members sat down at the dining room table to try and put their minds at ease in hopes that Matthew or the others would return with a vehicle, but a few minutes later a group of the beings gained entry into the house and seemingly put the family in a trance, forcing them to walk out with them. One of the beings looked over to the video camera, that’s when it cut out.

During the McPherson’s tape being shown on television, it was broken into scenes with short comments from professionals about the events that happened that night. The commenters included, the sheriff who found the tape, a video analyst who claimed it was likely fake, but it was possible that it could have been real, a Sci-Fi movie director who thought it was real because the family members didn’t seem to be acting or following a script other than ”get out”, and a musician named Julian Bond who claimed to have previously been abducted by extra-terrestrials.

When the McPherson’s tape was first released on television, it ended with the extra-terrestrials using their mind to switch the camera off from the other side of the room. Then there was a request to call a number if you had seen any members of the family that were abducted.

For a few years, speculation went around as to whether the tape was authentic or a hoax. There are parts of it that are really convincing and the expert analysis’ throughout the tape definitely added some substance to people’s belief, but it appears the missing persons report at the end of the tape was simply to try and convince the audience of its authenticity.

Later, when the McPherson’s Tape DVD became available, it seems that there was a cast list at the end instead of the missing persons report.

The cast members have now been publicized and the tape has been proved as a hoax. It seems that the people behind the tape did actually intend to convince audiences it was authentic, but when one of the stars hit a movie role, the truth was unravelled and the tape became a poor quality found footage movie that wasn’t very popular. Never the less, people are still interested in seeing the tape because of its background and the uncomfortable feeling people experienced before they knew it was a fake.

You can find the McPherson’s tape on Youtube and articles on websites claiming that the video is genuine, but that’s not true, and here’s a list of the actors:

If you visit IMDB’s Alien Abduction: Incident in Lake County (1998) you will also see that the sheriff, analysts and Julian Bond, the claimed abductee, were also all actors. Julian Bond actually assisted as a director. And although the video was a fake, it was creative, profitable and entertaining.