The Phoenix Lights gained huge attention, before getting into other alien and advanced civilization related subjects, is one that still baffles the UFO community. It was given the name ”The Phoenix Lights” and it’s a confusing one to say the least.

On March 13th, 1997, thousands of people reported lights of varying description in the skies of Phoenix, Arizona, USA and Sonora, Mexico. The event was caught by multiple cameras, at multiple angles, and by multiple witnesses, making it impossible to say the event was a hoax.

The incident occurred between 18:55 and 22:30 MST in a space of approximately 300 miles from the Nevada state line to the edge of Tuscon, Arizona.

The first report came from a man in Henderson, Nevada, USA, at 18:55, describing a V-shaped object, ”the size of a 747 [Boeing aircraft]”, making no sound other than ”rushing wind”, and had six lights on its leading edge. 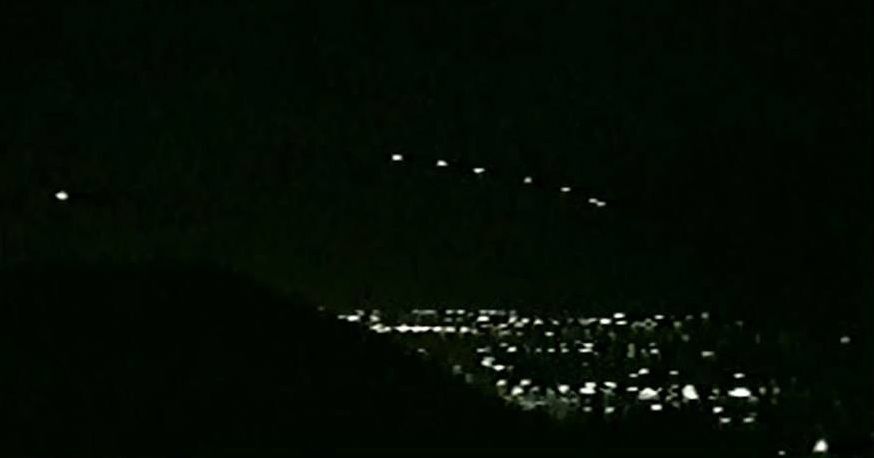 The next sighting was said to have come from an unnamed former police officer in Paulden, Arizona, after leaving his house around 21:15 MST. He claimed he was driving north and saw a cluster of reddish, orange lights in the sky, comprising four lights together and a fifth light trailing them.

More reports came in from Prescott and Prescott Valley at approximately 20:17 MST, claiming it was an opaque object that blocked the starry night sky as it passed over them.

There were two different light in the sky reported during the incident, one of a triangle formation of lights and another of stationary lights. The USAF claimed they identified the second group of lights as red flares that were dropped during a standard training exercise by jets flying out of Barry Goldwater Range in Southwest Arizona, but gave no explanation for the triangle formulation that captured everyone’s attention.

The reports that came from the non-flare lights in the sky described a huge, V-shaped UFO that moved silently through the sky and had five circular lights.

One of the witnesses to the incident was Fife Symington, then governor of Arizona. As the governor, he ridiculed the idea of it belonging to an alien civilization, but several years later described the lights he saw that night as ”other worldly” after admitting he later saw a similar UFO. Now, the governor’s claim doesn’t prove or disprove anything, but the military weren’t able to explain what the lights were, nor were any of the thousands of witnesses, despite many theories, including a craft from another civilization that was not man-made.

The Phoenix Lights was one of the biggest group sighting UFOs in history and still remains unsolved, unless it was an alien craft.

Many skeptics say it was a U.S military craft, but if so, I think they would have taken responsibility for it. There is of course the argument that it was a secret technology owned by the U.S Government, but if that were true, why would they test it over a greatly populated city like Phoenix?

This case is extremely difficult to comment on because there is very little to go on apart from some lights in the sky. Could it have been a craft of alien origin? Absolutely. But it could have just as easily not.